Sunset at the beach. What could be more perfect?

While I had already throughly enjoyed many aspects of my trip to Costa Rica, sunset at the beach seemed to be promising as a highlight.

Following a very rough, but scenic ride on dirt paths that serve as roads in the Costa Rican jungle and bisecting tiny towns, we arrived at the beach. 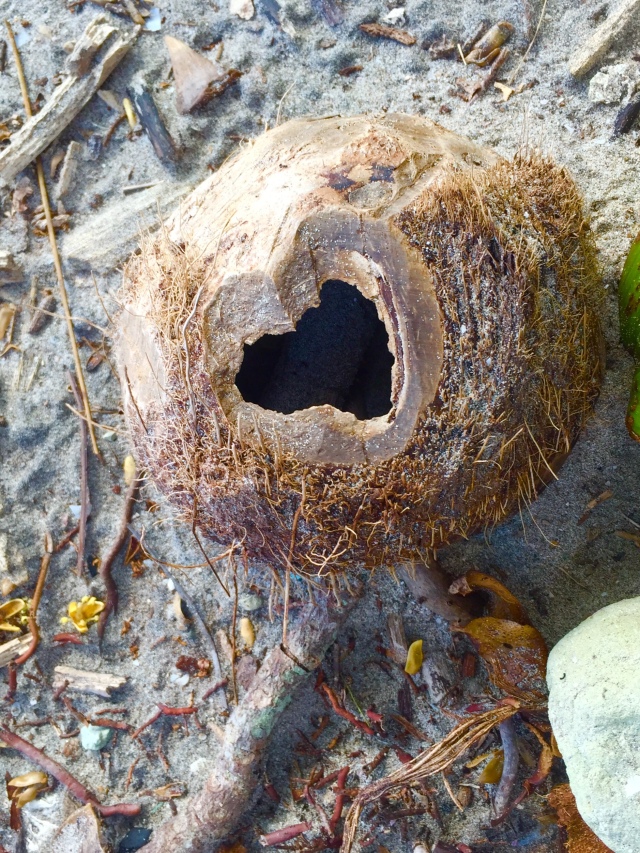 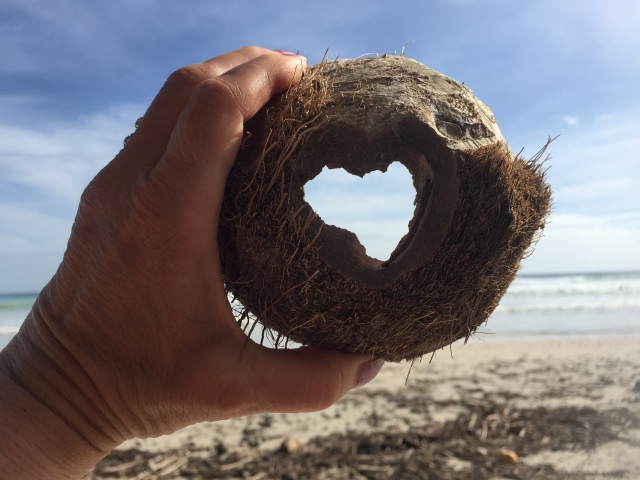 Our group had a great little area in which to hang out with various refreshments available. 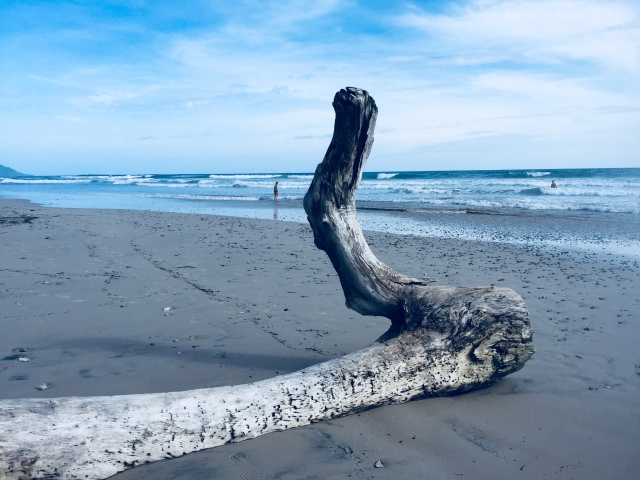 The surf was up, rolling over the sand in its predictable way, leaving some treasures like rocks and sand in its wake and sometimes returning to take them back to the sea. 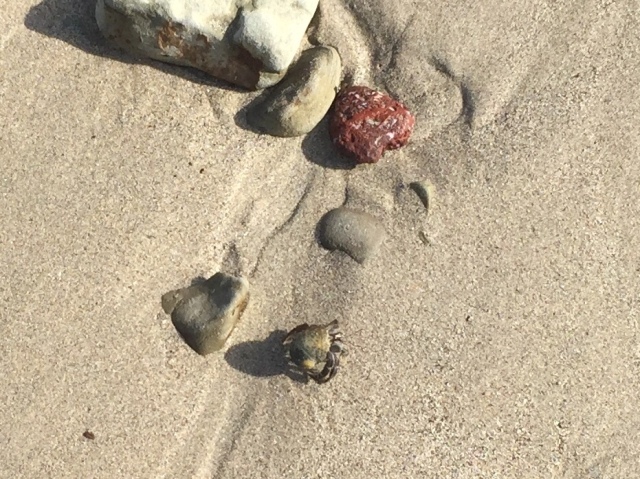 I looked for treasures in the sand. I watched a dog run in and out of the ocean, splashing in the waves, free from the entrapment of a leash, as this is not a requirement in public areas in Costa Rica. I looked down near my feet at the tiny hermit crabs searching for new real estate. I looked out into the ocean about 45 yards away and spotted a whale frolicking in the sea, it’s tail rising majestically from the blue. I took photos of some of my natural discoveries as they were and staged other photos as I had creative ideas.

I posed for pictures taken by friends and reciprocated as my friends posed. We decided to grab refreshments and walk to a rocky area of the beach to look for shells. Here I was, walking along a beach in Costa Rica sipping coconut water through a straw from a young coconut. #LivingTheDream

We scoured the sand for beautiful rocks and shells and picked up the chosen few as our feet were massaged by the small rocks and foaming ocean.

We returned to our area to put down our treasures and then decided to head out into the ocean one last time, so we could get out and dry out as we watched and photographed the sunset. The waves rolled towards us as we jumped to navigate the lapping water without going under. I noticed a slight bit of color developing in the sky, so I hollered to my friends I was going back to get my phone and get ready for the sunset. I walked along the wet side of the sand where the waves crossed and the idea crossed my mind to run, because I hadn’t had a chance to take a run during my trip, especially a beach run with my bare toes gripping the sand and the waves splashing over my feet. My eyes gazed across the ocean as I alternated feet stepping into the sand with the foamy water washing over my toes. #Bliss 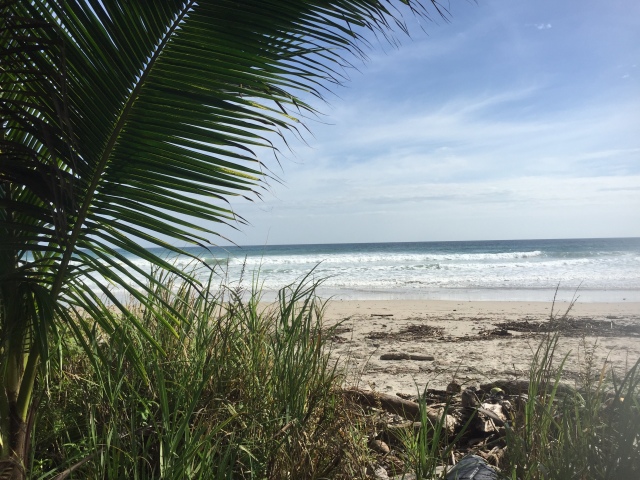 Suddenly I heard growling and barking to my left. I turned my head to see an open muzzle with angry teeth that lunged towards me, knocking me to the ground as the flesh ripped on my forearm. The dog bit into my hip as I tried to roll away, protecting my face, only to see a second, smaller dog also barking and attacking. Fortunately one of my friends saw what happened and ran towards the danger, trying to distract the dogs. The owners of the dogs also ran up and worked to get control of the dogs. All I remember is knowing people had arrived and repeatedly yelling, “Get the dogs!” During the incident, the dogs retreated once, but returned while the owners secured them. The owner of the larger dog, a Rottweiler, was mortified and apologetic, trying to help. I asked if the dogs had their shots and she said that yes they had and they were well cared for. She offered ocean water for my bleeding wounds, but I refused (gesturing to our area) saying I needed to go and we had clean water. She offered to pay for a doctor, but I did not want to go, feeling better that the dogs had shots. I just wanted to get the wounds washed out with clean water.

My friend helped me over to our area and the tour guides poured clean water on my wounds, dried them, applied antibiotic cream and wrapped them in gauze.

While I was being taken care of, the sunset was imminent. My new friends were asking if we needed to go so I could get back. I said, “No, it’s almost time for the sunset and that’s why we came.” “You’re more important than any photos we might take,” replied a friend and the group agreed. I said, “I want you to take photos! I can’t right now and I want some!” 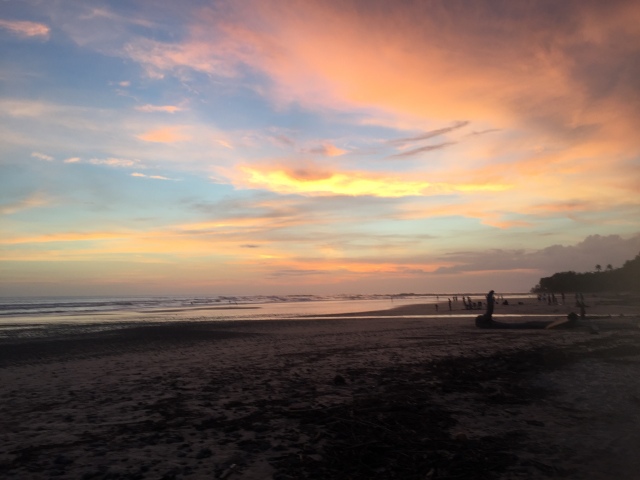 The group obliged and began taking photos. After I was bandaged up, I even got a few of my own. The sky darkened and we loaded our stuff and ourselves into the van.

The experience was shear terror. I am not a “dog person” and I particularly don’t like bigger dogs. During the attack my thoughts went to my son who was attacked by a German Shepherd when he was three and suffered bites that required emergency medical attention. As terrified as I was as an adult, I can’t imagine being only three years old and experiencing this. As a mostly solo runner on roads and trails, I am acutely aware of various dangers: cars, muggers, rocks, roots, wild animals, and, yes, dogs. I try not to run in traffic. I really don’t think too much that a “bad person” would know exactly where I will be running and is waiting to attack me and steal my iPhone. I know to stay focused on my surroundings and choose my steps carefully on trails to avoid injury. Wild animals usually are not interested in interacting with humans. But, dogs? They instinctively want to chase. As a runner, they have always felt like my biggest danger. I’d say it’s true.

By the time we returned to the resort after a dark and bumpy ride, my arm was not really hurting anymore, but my more-injured hip was. I ate dinner and then returned to the casita for bed. I left the wounds wrapped and didn’t look at them because I had no more gauze or bandages or antibiotic cream. As I removed my hat for bed I realized that my head was really hurting. That was the first moment I realized I had hit my head. I guess I didn’t notice due to the rest of the injuries. I slept on and off during the night between the injuries and seeing the open muzzle with angry teeth and hearing the barking and growling when I tried to close my eyes. I kept telling myself it was over and wasn’t real right then. The next morning I stepped into the outdoor shower and looked at the wounds. The arm wounds were obviously claw marks, but the hip injury was definitely a bite. Both injuries actually looked better than I imagined with no sign of infection. Several people in the group asked to see it including a nurse and a doctor who both agreed it did not look infected. 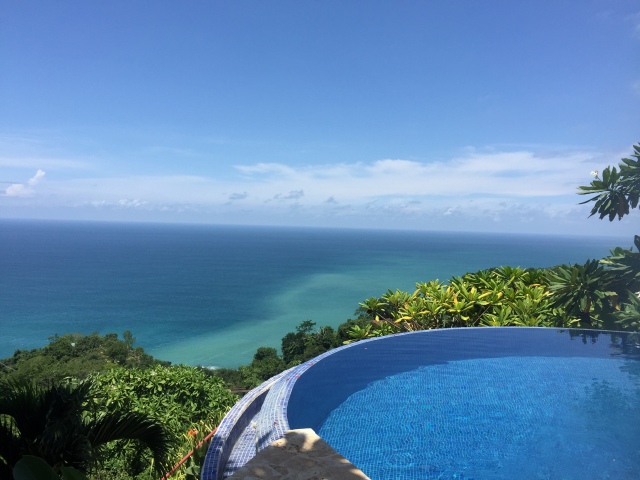 Later that day, I hung out over the edge of the saltwater infinity pool watching the butterflies and the ocean, but not feeling the joy they had brought me on the previous days. Silent tears escaped from my eyes and visions of the open muzzle with angry teeth interrupted my thoughts periodically. 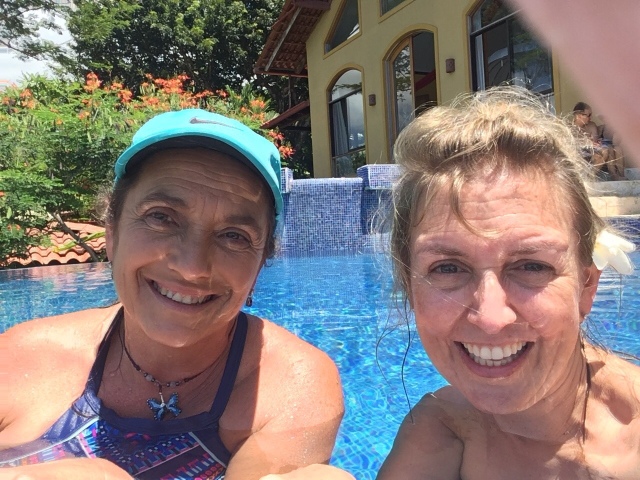 Eventually a friend joined me in the pool and our conversation distracted me from my thoughts. Later that afternoon, I was relaxing in the hammock and it occurred to me that the whole incident was only a couple of minutes of ugliness out thousands of minutes of beauty. I decided that the open muzzle with angry teeth would not rob my joy. The dog bite was not going to define my visit to Costa Rica.

It didn’t have to be a perfect trip to be a beautiful trip. #PuraVida